The Stewart Hall Art Gallery is happy to present LUMINA, an exhibition that presents the artworks of seven artists and that explores light from a perspective of sensory and cognitive destabilization.

LUMINA is a tribure to light, honoured not for what it enables us to do, but for what it is: a form of energy made up of corpuscles – which give it the status of a substance or body – and waves, through which it is propagated.  Its irradiating potential is precisely what is identified and emphasized as the heart of the matter.  The spreading of radiance implies a trajectory: light travels in a straight line, its photons moving through the narrowest slits until they encounter a screen.  Depending on its properties, the screen will either absorb the light, let it through, reflect it, or diffract it.

Magalie Comeau, the IvanovStoeva artist duo, Lisette Lemieux, Martin Messier, James Nizam, Josée Pellerin, and Étienne Rey all share a fascination with light.  Beams shoot up, brightness intensifies, rays are diffracted: these are some of the strategies used by the artist to reveal light in its most compelling and destabilizing aspects.  Light is energy that eludes our senses, triggering a perceptual and cognitive hesitation  – a gap between what the eye percieves and what the brain records, then recognizes.  And then, in a flash, what we have is simply…. magic. 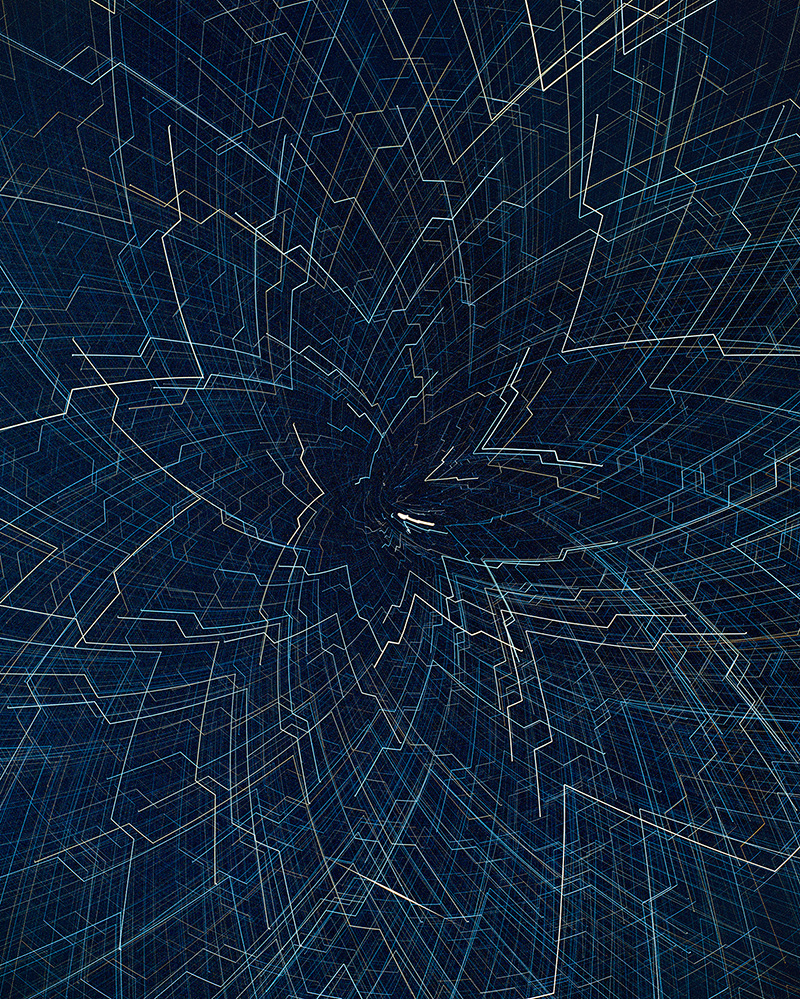 James Nizam works around the moon and opposite the sun. He tracks their heavenly dispositions to inhabit the night from the remote forests of British Columbia. Drawing upon thorough notations and experience accumulated over years of direct observation, Nizam anticipates the ancient galactic explosions that swarm and whirl around the North Celestial Pole tonight, echoes of unimaginably deep time.

Gallery Jones is pleased to present Apparent Motions, an exhibition of photographs, sculptures, drawings and sound media that invites viewers to move between the acts of thought, perception and embodiment to consider the appearance of intricate spatial forms. With a camera and a watch, Nizam documents, tracks and times the diurnal cycles of the night sky. In opening his camera’s aperture, he invites the remnants of massive cosmic bodies to find their final resting place, drawing lines in layers of celluloid. The combined revelations map the nodes of our minds to the constellations above, coalescing the volumes of the camera, the body and the stars.

The Field Transcripts (2019) are the first of many apparently coded languages that appear throughout the exhibition. At first, the transcripts are reminiscent of mysterious glyphs from the distant past inscribed upon detailed charts and geo-spatial coordinates. This opacity clears to reveal crisp graphic lines that represent the motion of the artist’s customized, multi-axial drawing machine – his camera. When applied to the camera as guides to zoom in/out over specific temporal increments, the transcripts become blueprints for exploring and tracking stars, movements and velocities. They are building blocks to articulate deep space(s) in the sky; keys to illuminate otherwise invisible forms and relations.

These mesmeric dimensions are revealed in the Drawings with Starlight (2018) series. The photographs anchor into the essential qualities of analogy photography, as light, space and time are the method and the means. The camera is both a passive instrument to be used (a detachable organ) as well as an active translator of a universal subtext. This description is particularly apt for a body of work that explores the intricate similarities of spatial thinking and visualization with the symphony of the stars and many possible dimensions that reveal themselves to the camera.

Other works, including Orrery and Earth Spin Moon Orbit (both 2019), extend the transmedia explorations that triangulate the instruments of their production to the viewers’ bodies and the star fields above. Architectures of the camera body, the gallery and the galaxy come to mirror our own fleshy interiors, as the plane of the negative and the vast depths of the cosmos correspond to the site of the percept.

For Apparent Motions, Nizam became immersed in a universe that at once surrounded and exceeded him – a universe that continues to speak in tongues embedded in starlight. 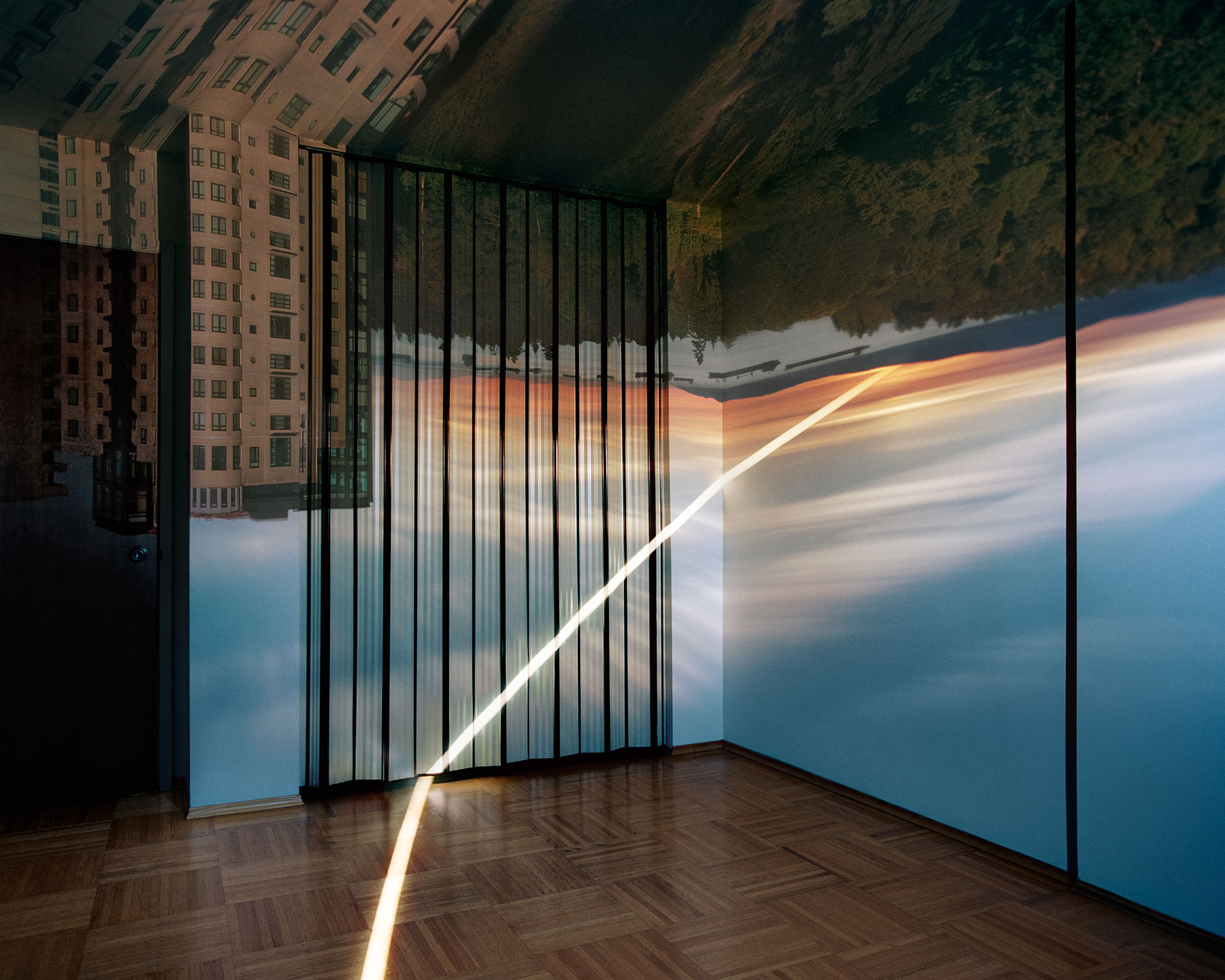 ECOLOGIES OF LANDSCAPE
Curated by Mark A. Cheetham

Barbara Edwards Contemporary is pleased to present our inaugural exhibition for BEC Project Space at 315 King Street West. Ecologies of Landscape gathers work by nine highly accomplished artists from Canada and abroad to re-imagine our perceptual, aesthetic, and ethical relationship with our home planet. In diverse media and from a variety of cultural and geographical perspectives these artists ponder what our connections to the Earth might be in this time of widespread concern about climate change. Especially in Canada, landscape painting has been the dominant way to approach and appreciate what we construe as ‘nature’ as well as our own identities. With increasing urgency since the 1960s, however, artists world wide have grappled with the inadequacies of the landscape genre amidst concerns over land stewardship and the environmental degradation of our shared planet. Works in this exhibition reconceive land and landscape as presented and experienced in art.

Ecologies of Landscape challenges us to reconsider what art and artists can contribute to the ecological future of the earth, what ‘being terrestrial’ means for each of us. British European artist Tacita Dean photographs the stunning oddities of Madagascan Baobab trees. Bonnie Devine’s Radiation and Radiance drawings and Canoe: to the North Shore narrate the discovery of uranium near Elliot Lake in the Algoma region of northern Ontario and its impact on the Anishinaabe Ojibwa of the Serpent River First Nation, to which she belongs. Documenting a rock on an Icelandic glacier from all sides, Olafur Eliasson’s photo series The small glacier surfer sets the long game of geological change against the time it takes for a human being to move around an object. Isabelle Hayeur disrupts the seductive beauty of conventional underwater photography with a troubling image of Spirogyra – a plant that thrives on pollutants left by humans – photographed in Québec’s Eastern Townships. Reflecting on the horrors of missing and murdered Indigenous women Shelly Niro’s photographs recall landscape photography in a familiar role, that of nature as a refuge from a violent human world. James Nizam employs the magic of the camera obscura to create two still images focusing our gaze on that most fundamental diurnal phenomenon, the rising and setting of the sun. Reinhard Reitzenstein’s meticulous ‘text’ drawings of trees intone a profound reverence for these arboreal beings. British artist Simon Starling’s digital video and stills titled Project for a Rift Valley Crossing – set in the Dead Sea area of the Middle East – hypnotically involve us in the material and conceptual dimensions of our interactions with land and water. Paul Walde’s video Tom Thomson Centennial Swim returns to a regional obsession about landscape art and the land, commemorating Thomson’s mysterious death on Canoe Lake in 1917.

Ecologies of Landscape is curated by Mark A. Cheetham, University of Toronto. His book Landscape into Eco Art: Articulations of Nature Since the 60’s was published in 2018. Neda Omidvar, Director at Barbara Edwards Contemporary, is the Assistant Curator.

The artists included in the exhibition have process-oriented, intensive practices that infuse elements of technical experimentation. Each artist’s work demonstrates a unique resonance with materiality, whether experimenting with the physicality of paint or clay or conceptualizing about how to create light forms as three-dimensional objects in space.

Diyan Achjadi, Brendan Tang and Howie Tsui combine ancient and contemporary aesthetics in their ceramics, prints, and drawings, and mix historical influences with aspects of popular culture to address themes of cultural hybridity. Jeremy Hof, Angela Teng, and Mark De Long experiment with the physical properties of materials, subverting expectations of how these materials are traditionally seen. James Nizam studies the material and spatial qualities of light, rendering it into sculptural geometric forms.

D MUSEUM presents Weather, an exhibition elevating our experiences of the weather through photographs, video, sound and installation works, from May 3 to November 25, 2018. The exhibition features the works of 26 international artists, each engaging with climatic phenomena such as sunlight, snow, rain, mist and thunderstorms from her or his own unique perspective.

From the thunder and lightning of Greek mythology to storms of 19th-century British novels and the lyrics of contemporary pop songs, the weather has been an essential driving force in art, culture, philosophy, fashion, design, and all areas of life since ancient times. This exhibition introduces the diverse approaches of artists creating weather-inspired works, ranging from aesthetically distinct photographs to installation works amplifying tactile and auditory sensations. Divided into three chapters – Recognizing the Weather, Talking with the Weather, and Remembering the Weather – the exhibition reads like an essay consisting of a prologue, six stories and an epilogue.

Weather awakens the sensibilities and memories of each audience, in a space filled with special stories of the weather, told by artists with multifaceted perspectives and in different spaces and times. The works in the exhibition invite us to recall internal memories and forgotten sensations of the weather, discovering the value in familiar everyday moments.